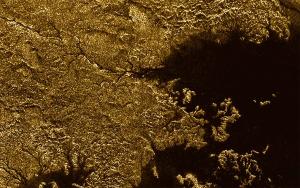 Flowing rivers have carved deep canyons on Titan, the largest moon of Saturn, such as Vid Flumina at the top left of this image. The rivers are made of liquid methane and ethane, and they flow into lakes and seas (the dark features on the right of this image, made from radar observations by the Cassini spacecraft). Some of the canyons are quite steep, setting up the possibility that there could be ultra-cold rapids on the big moon. [NASA/JPL/ASI]

Adventure travelers of the distant future may have some amazing destinations to choose from. They might hike around the volcanoes of Io, one of the moons of Jupiter; on Mars, they could climb the solar system’s tallest mountain; or they could watch giant geysers erupt on Triton, the biggest moon of Neptune.

White-water rafters might have a good location as well: Titan, the largest moon of Saturn. They’ll need a well-insulated wetsuit, though, because the rivers are filled with liquid methane and ethane, which are hundreds of degrees below zero.

Scientists discovered lakes and seas on Titan more than a decade ago. They also found channels that look like riverbeds. But none of the channels appeared to have any liquid in them.

Earlier this year, though, they revealed the discovery of liquid-filled canyons on the big moon. Some of them are miles long, and up to a third-of-a-mile deep.

The liquid in some of the bigger canyons is at the same elevation as the lakes and seas they flow in to. But in some of the smaller canyons, the level is much higher. That means they’d have a quick flow. And if there are any rocks around, they’d also have some choppy sections — perfect spots for a little white-water rafting.

Saturn is in good view this evening. It’s one of two planets to the upper left of the Moon after sunset. The brighter one is Venus, the “evening star.” Fainter Saturn is close to its right.

More about the Moon and planets tomorrow.