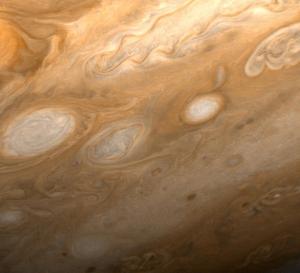 The best-known storm in the solar system is Jupiter’s Great Red Spot. It’s big enough to swallow Earth, and it may have been whirling for four centuries.

But many other big storms also spin through Jupiter’s atmosphere. There’s a “string of pearls” to the south of the red spot — eight white ovals that are thousands of miles across. And another storm inhabits the latitudes between the red spot and the white ovals. It started as a set of white ovals, but they merged to form another red spot.

The string of pearls was first observed in 1986. The number of pearls has varied over time — from as few as six to as many as nine. They’re spun up by powerful jet streams to their north and south that blow in opposite directions.

Three white ovals were born to the north of the pearls in 1939. They lasted for decades, separated by smaller storms that spun in the opposite direction. But two of the ovals merged in 1998, and the third joined them in 2000.

Just five years later, the storm turned red — as red as the Great Red Spot. It might have dredged up compounds from deep within Jupiter that are red, or that turn red when exposed to sunlight. The storm continues to blow today — keeping things stirred up in Jupiter’s turbulent atmosphere.

And Jupiter is in great view tonight. The planet is just a couple of degrees from the Moon. For the hours they’re in view, nothing outshines Jupiter except the Moon.

More about the Moon and another companion tomorrow.