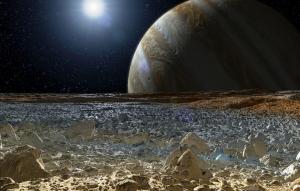 The giant planet Jupiter looms above its moon Europa in this artist's concept. Europa's surface is made mainly of frozen water. A deep ocean of liquid water lies below the icy crust. Two other Jovian moons also appear to have sub-surface oceans, while water is abundant in Jupiter's atmosphere, forming giant clouds with powerful thunderstorms. [NASA/JPL/Caltech]

You can’t go much of anywhere in the solar system without sniffing some water. There’s frozen water on Mars, in comets and asteroids, and on the surfaces of many moons. And there’s liquid water in the atmospheres of the giant planets, and below the icy crusts of some of their moons.

Water is especially prevalent at Jupiter, the largest planet. Jupiter stands close to the upper left of the Moon at nightfall, and shines like a brilliant star.

On Jupiter itself, water forms towering clouds that produce monster thunderstorms. But water also appears to be abundant on three of Jupiter’s moons.

There’s little doubt that an ocean lies below the crust of Europa. It contains much more water than Earth’s oceans. And there may well be “chimneys” at the bottom of the ocean that belch hot, mineral-rich fluids into the water, providing possible energy and nutrients for life.

There’s also evidence for an ocean on Callisto. It’s buried far deeper than the ocean on Europa. And there would be less energy in the ocean environment, making it a less likely home for life.

The third possible water world is Jupiter’s largest moon, Ganymede. Evidence for water there includes oddities in Ganymede’s magnetic field, cracks in the crust like those on Europa, and minerals on the surface that likely were deposited by salty water. Ganymede’s ocean would be the deepest of the three, though, so there’s little chance of splashing into this water world anytime soon.