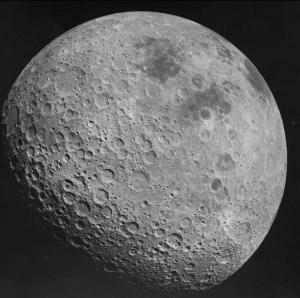 The far side of the Moon is far more rugged than the familiar near side, as depicted in this photograph by an Apollo 16 astronaut. The crust on the far side is far thicker than on the near side, and the landscape shows fewer dark volcanic plains. [NASA]

The same hemisphere of the Moon always faces Earth, locked in place by the gravitational interaction between the two bodies. The other hemisphere is known as the back side, the far side, or the dark side — not because it doesn’t get any sunlight, but because it’s hidden from view.

Spacecraft have shown us the dark side in detail, though. And it doesn’t look much like the view we’re used to. That side of the Moon has almost none of the dark, smooth volcanic plains found on the near side. Instead, it’s blotchy, with lots of impact craters and jumbled mountains. Apollo 8 astronaut William Anders — one of the first three men to see the far side with his own eyes — described the view from lunar orbit in 1968:

ANDERS: The back side looks like a sand pile that my kids have been playing in for a long time — it’s all beat up, no definition. Just a lot of bumps and holes.

The crust on the far side is miles thicker than on the near side. That may be because a smaller moon splatted into the far side billions of years ago. The impact wasn’t strong enough to blast out a crater. Instead, the smaller moon simply spread out across the landscape — creating a view unlike anything on the Moon’s familiar face.

And that face is in the southwest as night falls this evening, with two bright companions. The star Spica stands below the Moon, with the brilliant planet Jupiter a little farther to the right of the Moon.