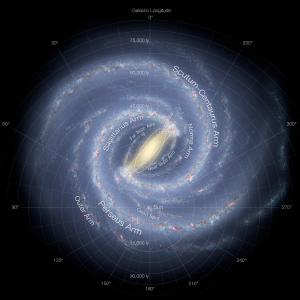 This artist's concept shows the major and minor spiral arms of our home galaxy, the Milky Way. Our solar system is near the inner edge of the Orion Arm or Orion Spur. [NASA/JPL-Caltech/ESO/R. Hurt]

The next few evenings offer a great chance to see the Milky Way — the hazy band of light that outlines the disk of our home galaxy. It arcs high across the sky at nightfall, and there’s no Moon around to spoil the show. As always, though, you need dark skies to see it — streetlamps and other artificial light sources quickly overpower its milky glow.

The center of the galaxy consists of a large “bulge” of stars. Most of the stars are billions of years older than the Sun. But there are also clusters of hot young stars.

The bulge is hidden from view behind thick clouds of dust. But its location is easy to spot. Look in the south-southwest after the sky gets good and dark for teapot-shaped Sagittarius. The center of the galaxy is just above the spout of the teapot. And right now, the planet Mars stands at right about the same spot, shining like a bright orange star.

A disk of stars and gas surrounds the central bulge. It spans about a hundred-thousand light-years. Our solar system is a bit more than half way from the center of the galaxy to its edge.

The disk contains hundreds of billions of stars. The hottest and brightest congregate in spiral arms that wrap around the bulge. There are four major arms, plus at least a couple of partial ones. We’re near the edge of one the partial arms, which incorporates many of the bright stars of winter nights.

The galaxy doesn’t end at the edge of the disk, though. More about that tomorrow.