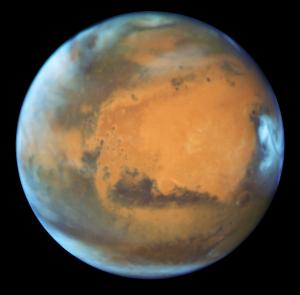 Mars puts on its best face in this Hubble Space Telescope image, snapped on May 12, when Mars was just 50 million miles from Earth. The Red Planet is putting in its best appearance of the year. It rises around sunset and looks like a brilliant orange star. The dominant feature in this image, the broad orange region at center, is Arabia Terra, a highlands area that may be among the oldest landscapes on the planet. Clouds and haze are visible across much of the planet. [NASA/ESA/Hubble Heritage Team]

Despite the sand and abundant sunshine, the surface of Mars isn’t exactly South Beach. The planet’s thin atmosphere is made almost entirely of carbon dioxide, and the average temperature is colder than Antarctica. Even so, the right kind of organisms might be able to survive there. In fact, they sort of have.

European scientists sent several types of tiny organisms to the International Space Station. That includes a fungus that lives inside rocks in Antarctica. Half of the organisms were placed outside the station, in a box that simulated conditions on Mars — the same atmosphere, temperature, and radiation. The others were exposed directly to space.

After a year and a half, the organisms were returned to Earth. In the lab, the researchers found that about 60 percent of the Antarctic fungi exposed to Mars-like conditions were still alive. What’s more, their DNA had been unharmed by the experience. Lichens from two European mountain ranges also fared pretty well in the Mars-like environment.

The experiment doesn’t reveal anything about whether there’s ever been life on Mars. But it does tell us that if microscopic life ever did develop on the Red Planet, it just might find today’s conditions there highly tolerable.

And Mars is in the southeast as darkness falls tonight, below the Moon. The Moon will move closer to the bright orange planet as they arc across the south during the night. And they’ll be even closer tomorrow night.