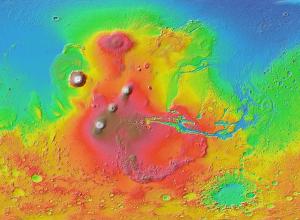 Giant volcanoes (circular white spots) highlight Tharsis Ridge, one of the most prominent regions on the surface of Mars. This image is color coded to indicate altitude; red regions are higher than blue and green. Tharsis Ridge is an especially tall region made of dense volcanic rock. A recent study says this region formed farther north, but because of its great weight, it slid toward the Martian equator, shifting the entire "skin" of the Red Planet. The most prominent volcano in the ridge, Olympus Mons, is at the upper left, on the edge of Tharsis. A series of canyons known as Valles Marineris forms a green slash that cuts through the right edge of the ridge. [NASA/JPL/MSSS]

Mars just wasn’t comfortable in its own skin. So it shifted the skin around. That moved many of its features — like shifting your nose down to your chin.

Researchers in France outlined that scenario earlier this year. They say it explains the odd locations of underground ice and some ancient riverbeds.

The slippage took place about three-and-a-half billion years ago, after the formation of a region of giant volcanoes north of the Martian equator. Known as Tharsis, the region is tall, wide, and heavy. In fact, it’s so heavy that it began to slip southward, pulling the planet’s entire crust along with it. Eventually, it settled around the equator — about 20 degrees south of where it formed.

By that time, vast amounts of ice had been deposited beneath the planet’s poles, and riverbeds had been carved all along the surface. But the shifting crust moved those features as well. So the ice features are found well away from the present-day poles, and some of the riverbeds are found in regions that make sense only if they’ve been displaced as well.

Of course, it’s likely to take a while to confirm this picture of Martian history — and let us know if Mars really did make its own skin crawl.

And Mars is putting in its best appearance of the year right now. It rises around sunset, remains in view all night, and is at its brightest. Look for it low in the southeast as night falls, shining brilliant orange.