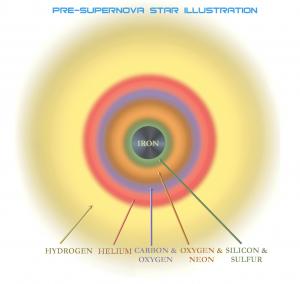 Shortly before a massive star explodes as a supernova, it consists of a series of layers, like an onion. In this case, each layer consists of a different chemical element, from iron in the core to hydrogen at the surface. The star was born with the hydrogen and helium, but manufactured the other elements through nuclear fusion reactions its its core. When the star explodes, it scatters many of these elements into space, where they can be incorporated into new stars and planets. [NASA/CXRO]

When a massive star reaches the end of its life, it blasts itself apart as a supernova. But this moment of death is also a moment of creation. As the star rips itself to bits, it creates new chemical elements at a furious rate. In a matter of seconds, it manufactures most of the elements that are heavier than iron — from iodine and xenon to lead and uranium. The supernova then blasts some of these elements out into space.

Other than hydrogen and helium, which were made in the Big Bang, the elements on the lightweight end of the scale were forged by nuclear reactions in the hearts of stars. But that doesn’t work for heavier elements. Even the hottest, most massive stars can’t produce enough energy in their cores to “fuse” together lighter atoms to make anything heavier than iron and nickel.

But when the star explodes, it produces enormous amounts of energy. For a few seconds, temperatures and pressures just outside the star’s core are so extreme that a huge number of atoms fuse together to make much heavier ones.

In recent years, though, research has suggested that not all of the heavy elements come from supernovae. Some of the heaviest may be forged when the dead cores of these exploded stars ram together. In fact, it’s possible that that’s how most of the gold came into existence. So that gold ring you’re wearing could be debris from the collision of two stellar corpses — the remnants of mighty stars that blasted themselves to bits.