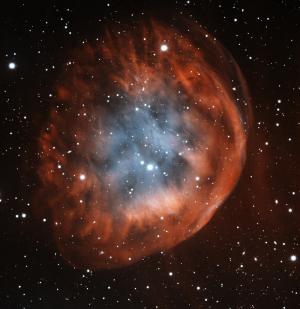 A star expels a mixture of chemical elements into space as it reaches the end of its life, including some that the star was born with and some that it manufactured. This image, for example, shows a bubble of gas and dust, known as Sh2-290, expelled by a star at its center. This expanding bubble, known as a planetary nebula, contains hydrogen (red), oxygen (blue), and sulfur (blue-green). The hydrogen was created in the Big Bang and incorporated into the star as it was born. The star created the other elements through nuclear fusion reactions in its core. Stars manufacture almost all of the chemical elements in the universe. [T.A. Rector (Univ. Alaska Anchorage)/H. Schweiker (WIYN/NOAO/AURA/NSF)]

In fact, almost all the elements were created by stars. The main exceptions are the lightest and simplest elements — hydrogen, helium, and a smidgen of lithium.

Hydrogen came first — or at least hydrogen nuclei: single protons created in the first fraction of a second after the Big Bang. After a few minutes, the universe had cooled enough that two protons and two neutrons could stick together to form the nuclei of helium.

After a few hundred thousand years more, the universe cooled enough to allow electrons to stick to the bare nuclei, turning them into complete atoms.

Over time, the hydrogen and helium started clumping together to make stars. The cores of these stars were hot enough to ignite the fires of nuclear fusion, which combine lightweight atoms to make heavier ones — eventually making almost all the elements we see in the universe today.

Yet hydrogen and helium continue to dominate the chemical brew. Hydrogen accounts for about three-quarters of all the mass in the universe, with helium accounting for about a quarter. Everything else makes up less than two percent of the total — forged in the hearts of stars.