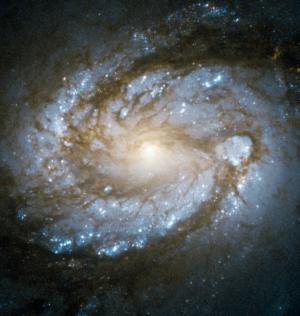 Bright waves of new stars, lanes of dark dust, and a central clump of billions of older stars highlight this Hubble Space Telescope view of Messier 100, one of the leading members of the Virgo Cluster, a collection of hundreds of galaxies. M100 is bigger and more massive than our home galaxy, the Milky Way. It is about 56 million light-years away. [ESA/NASA/STScI]

For sheer grandeur, no astronomical object beats a spiral galaxy. And one of the grandest of them all climbs high across the sky on spring nights: Messier 100. We see it face-on, providing an amazing view of its delicate spiral arms.

The galaxy is one of the leading members of the Virgo Cluster — a couple of thousand galaxies that travel through the universe together.

M100 is bigger and more massive than our home galaxy, the Milky Way. But like the Milky Way, it’s a wide, flat disk. Waves ripple through the disk, squeezing clouds of gas and dust and causing them to give birth to new stars. Many of the newborn stars are especially hot and bright, so they outline the waves, forming the spiral arms.

M100 has another thing in common with the Milky Way: It has a couple of smaller companion galaxies. The gravity of these galaxies is tugging on M100. That may be responsible for a slight offset in one side of the spiral, making at least one of the spiral arms look a bit deformed.

A couple of decades ago, Hubble Space Telescope discovered some stars in the galaxy that are good mile markers. That allowed astronomers to make a good measurement of M100’s distance: about 56 million light-years.

And a small telescope reveals M100 shining from that great distance in the corner of the constellation Coma Berenices, near Virgo. A slightly bigger telescope begins to reveal its great beauty — a grand spiral galaxy whirling through the cosmos.