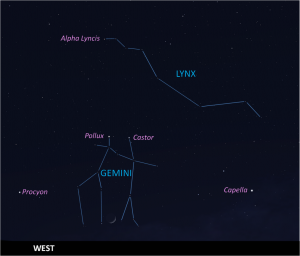 Lynx is a long but faint constellation that stands well up in the west to northwest at nightfall on May evenings (shown here on May 25, above the crescent Moon). It was created by Johannes Hevelius in the late 17th century to fill a gap between more prominent constellations. He named it after a cat not because it resembled one, but because you need the eyes of a lynx to see it.

Johannes Hevelius saw things that no one else did. Perhaps that was because he had a vivid imagination. Or perhaps it was because he consumed a lot of the famous beer he brewed. But whatever the reason, in the late 17th century he drew 10 new constellations. All of them filled in regions where no constellations had existed before — relatively dark areas of the sky with almost no bright stars.

And seven of those constellations are still with us today. An example is Lynx, which is in the west and northwest at nightfall. Although it’s faint, you can find its location with the help of three bright stars below it: Pollux and Castor, the twins of Gemini, which are almost due west; and even-brighter Capella, the leading light of the charioteer, to their lower right.

Hevelius, who didn’t use a telescope, counted 19 stars in that region, between Capella and the Big Dipper. He linked some of those stars in a zigzag pattern. And showing that he had a sense of humor, he called the new constellation Lynx, after the wild cat. He didn’t pick the name because the pattern looked like a lynx — it was because the viewer needed the eyes of a lynx to see it.

And thanks to light pollution, it’s even harder to see today. To pick it out, you need a nice, dark sky, far from city lights. From the suburbs, you might make out a few stars, especially the brightest one, Alpha Lyncis. It’s an orange giant that’s 200 light-years away — the brightest “spot” of a faint cat.