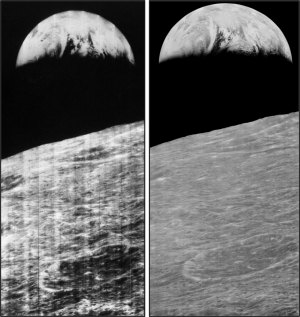 Lunar Orbiter 1 snapped its first pictures of the Moon on August 18, 1966. And five days later, the first American spacecraft to orbit the Moon took the first picture of Earth rising over the Moon. The image at left was processed with 1966 technology, while the version at right was reprocessed from the original data with modern techniques, providing a much sharper view.  The Lunar Orbiter series helped planners select landing sites for the Apollo missions, while scientists used the images to produce the most detailed maps of the Moon to that time. [NASA]

Until a half-century ago, maps of the lunar surface were pretty coarse. Even the best telescopes couldn’t show features smaller than a couple of miles in diameter. And the lunar farside — the hemisphere that always faces away from Earth — had been seen in only a handful of crude pictures.

But all of that began to change 50 years ago today. That’s when Lunar Orbiter 1 started snapping pictures of the lunar surface — pictures that revealed details as small as a few feet across.

Lunar Orbiter was designed to support the Apollo missions to land astronauts on the Moon. It took pictures of possible landing sites to make sure they were flat and free of dangerous boulders.

Scientists wanted Lunar Orbiter to take its pictures on film, which provided sharper images than TV cameras. But there was no way to get the film back to Earth. So engineers devised an ingenious system. The camera took a couple of hundred pictures on 70-millimeter film. When the film reached the end of its roll, it was developed inside an on-board laboratory. It was then scanned, and the images were transmitted to Earth.

The five Lunar Orbiters also snapped highly detailed images of almost the entire lunar surface. The maps made from these pictures weren’t surpassed until fairly recently.

Lunar Orbiter 1 took one of its most famous pictures on August 23rd, 1966: a crescent Earth rising above the lunar surface — the first view of Earth from the vicinity of the Moon.