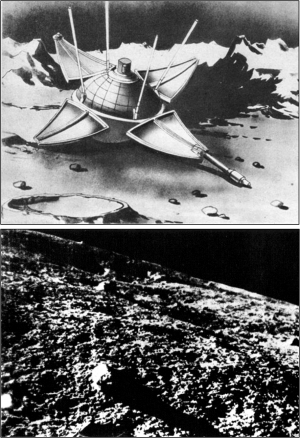 Luna 9 was the first spacecraft to land on the Moon, in Februay 1966 (artist's concept, top). The Soviet probe beamed back several panoramas of its landing site, on the edge of a small crater (bottom). It operated for several days before its batteries died. [NASA]

In February of 1966, the Soviet Union announced yet another “first” in the Space Race: the first spacecraft to land on the Moon. Luna 9 touched down on February 3rd, and over the next three days, it transmitted nine pictures of its surroundings in the Ocean of Storms.

The Soviets had been trying to land on the Moon for years. But 11 previous attempts had exploded during launch, failed to leave Earth orbit, crashed into the Moon, or missed the Moon entirely.

Luna 9 finally succeeded. During three days of operations, it beamed back panoramas of its landing site, on the slope of a small crater. The images revealed small rocks and a powdery “soil” known as regolith. To the relief of those working on sending astronauts to the Moon, the regolith was firm enough to support the lander’s weight — it didn’t sink from sight, as some had feared.

At first, the Soviets didn’t release any of Luna’s pictures. But that didn’t stop the world from seeing them. The Jodrell Bank Observatory in England was monitoring Luna 9 with a big radio telescope. Engineers realized that the pictures were being transmitted in the same format used to send pictures to newspapers. So they brought in a receiver from a London paper, captured the images, and released them to the world. Soviet officials got a bit huffy, but they eventually released the pictures on their own — the first views from the surface of the Moon.