To the Moon and Back

An artist's concept shows Luna 16, a robotic Soviet probe that landed on the Moon, scooped up a small sample of lunar soil, and returned it to Earth for analysis. [Courtesy historicspacecraft.com]

Not long after the first Apollo astronauts landed on the Moon, the Soviet Union abandoned its own Moon-landing program. It didn't give up on exploring the Moon, though. In fact, one of its most successful missions reached its climax 40 years ago today, when a capsule carrying about a hundred grams of moonrock landed in Kazakhstan.

Luna 16 had landed on the Moon just four days earlier. It touched down in an ancient volcanic plain known as the Sea of Fertility. It was the first landing in that region of the Moon, and the first nighttime landing anywhere on the Moon.

Even though it was nighttime, that portion of the Moon was illuminated by sunlight reflecting off of Earth. That made it bright enough for the craft to transmit pictures back to Earth, although they've never been released.

Luna then drilled about 14 inches into the surface. The drill contained a hollow tube that filled with dirt and rocks. This sample was dropped into a container that soon blasted back toward Earth.

Luna 16's sample was small compared to that of the Apollo missions. And the lack of pictures of the landing site have made it hard to judge the context of the sample.

Even so, it's from a region of the Moon that no other lander visited either before or since. So Luna 16's sample is a scientific treasure that has helped scientists piece together the story of the formation and evolution of our satellite world -- a story told in bits of moonrock. 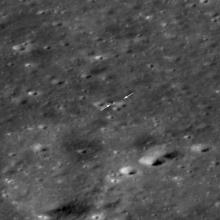 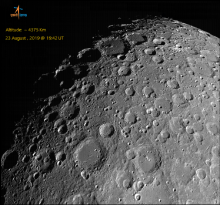