In late February of 1942, British anti-aircraft radar stations were bombarded with a “noise” that they couldn’t filter out. Fearing that Germany had found a new way to jam the radar, physicist and army officer Stanley Hey investigated. He discovered that the noise appeared only during the day, and that it tracked the Sun across the sky. He also found that a giant sunspot was moving across the Sun at the time.

Hey concluded that the noise came from the Sun itself — the first confirmed detection of solar radio waves. Thanks to wartime secrecy, though, Hey couldn’t share this discovery until after World War II.

Most of the time, the Sun is fairly quiet at radio wavelengths. It does produce some background radio waves, so it’s the brightest radio object in the sky — but only because it’s a big, close target.

The Sun produces more radio energy when more sunspots darken its surface. And it produces bursts of radio waves like this during solar flares and other outbursts. [SFX: sun audio]

Studying solar radio waves reveals details about the Sun itself, and especially about its atmosphere. The radio waves provide a 3-D view of what’s happening out to distances of millions of miles. They also reveal the magnetic field that permeates the atmosphere, and how the magnetic field may heat the outer atmosphere to millions of degrees — discoveries made possible by bursts of static on British radar 75 years ago. 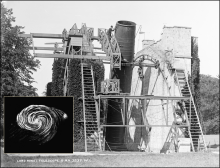