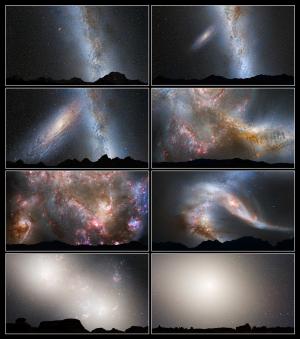 A series of images shows the collision and merger of the Milky Way and its nearest large galactic companion, M31, the Andromeda galaxy. Top left shows the galaxies still far apart, with M31 a tiny disk at upper left and the starry band of the Milky Way forming the bright streak across the night sky. M31 grows bigger in the next two images, then slams into the Milky Way, stirring up the stars of both galaxies and triggering a violent burst of starbirth. In the bottom row, the newly merged galaxies settle into life as a giant elliptical, with a bright haze of starlight filling Earth's night sky. The collision won't happen for several billion years, though. [NASA/ESA/Z. Levay and R. van der Marel (STScI)/T. Hallas/A. Mellinger]

The Milky Way is doomed. Our home galaxy will collide with the Andromeda galaxy. The collision will scramble both of them, ejecting many of their stars. The two galaxies will then merge — and the Milky Way as an individual galaxy will be no more.

Andromeda and the Milky Way are the biggest members of the Local Group, a small family of galaxies. Both are giant spiral galaxies that contain hundreds of billions of stars.

Right now, they’re about two and a half million light-years apart. But they’re caught in each other’s gravitational grip. So every hour, they move about a quarter of a million miles closer — the distance from Earth to the Moon.

As they get closer, their approach will accelerate. In about four billion years, the galaxies will ram together. Individual stars are so widely spaced that collisions between stars are unlikely. But the gravity of all the stars and gas clouds will stir things up. It’ll eject big streamers of stars from the galaxies, and cause clouds of gas and dust to slam together, giving birth to millions of new stars.

Over the following billion years or so, Andromeda and the Milky Way will merge to form a single galaxy — one of the most impressive in all the cosmos.

Andromeda is pretty impressive even now. From a dark skywatching location, it’s visible to the unaided eye. It looks like a tiny smudge of light. At this time of year, it’s high in the west as night falls — a glimpse at our galactic future.