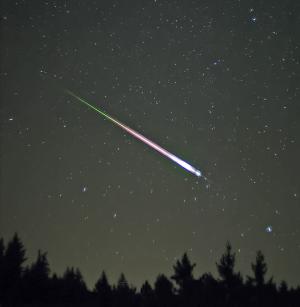 A colorful Leonid meteor streaks across the sky in this 2009 image. The Leonids peak this week, but bright moonlight will overpower all but the brightest meteors. [Navicore/Wikipedia]

The Leonid meteor shower is at its best the next couple of nights. Unfortunately, it’s being cooled off by the bright Moon.

The Leonids take place every November, when Earth crosses the orbital path of Comet Swift-Tuttle. The comet is a big ball of ice and rock. As it comes close to the Sun, the solar heat causes some of its ices to vaporize and spew out into space. That also releases small particles of rock.

Over time, these particles spread out along the comet’s orbital path, leaving a trail of debris. When Earth flies through this path, it sweeps up some of the grains of comet dust. They slam into the atmosphere at tens of thousands of miles per hour. They quickly disintegrate, forming the glowing streaks of light known as meteors.

Most of the particles that form the meteors are no bigger than BBs or perhaps pebbles. But a few are larger, so they form especially bright streaks. They can leave glowing trails that can remain visible for several minutes.

Unfortunately, though, most of the meteors are so faint that they’re not visible from light-polluted cities — or through the glare of an almost-full Moon, which is what we have right now.

To have a chance to see the Leonids, you need to find a dark but safe viewing spot far from the city — something like a state or national park. The Leonids are at their best between midnight and dawn, when your part of Earth turns most directly into the meteor stream.