Fireworks will light up the skies of many American cities and towns tonight — celebrations of Independence Day.

For a real fireworks display, though, you might want to visit one of the Milky Way’s companion galaxies. It’s giving birth to many thousands of new stars, including some of the biggest and brightest yet seen anywhere — a result not of independence, but of a close relationship with another galaxy.

The Large Magellanic Cloud is too far south to see from the continental United States. In southern-hemisphere skies, though, it’s quite a sight — a bright cloud that’s several times bigger than the full Moon.

The galaxy is much smaller and fainter than the Milky Way. But it’s right next door — just 160,000 light-years away. That’s one of the reasons it looks so bright.

Another is that the galaxy contains millions of vigorous young stars — stars that are thousands of times brighter than the Sun. And it’s giving birth to more. In fact, it contains the largest and brightest stellar nursery in the entire Local Group — the family of galaxies to which the Milky Way belongs. More about that tomorrow.

The fireworks probably are the result of a gravitational interaction with another galaxy, the Small Magellanic Cloud. The smaller galaxy passed close to the bigger one, squeezing vast clouds of gas and dust. The clouds then gave birth to new stars — triggering fireworks in a busy galaxy. 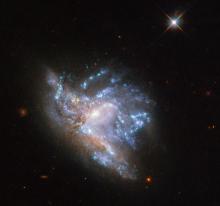