One of the monsters of the Milky Way climbs across the south on winter nights. Betelgeuse, the bright orange shoulder of Orion, is high in the southeast at nightfall, and due south a couple of hours later.

The star is so huge that if it took the Sun’s place in our own solar system, it would engulf everything out to Jupiter, the fifth planet.

Betelgeuse was the first star other than the Sun to have its size measured. But despite its great girth, it took an entirely new technique, known as interferometry, to make that measurement. 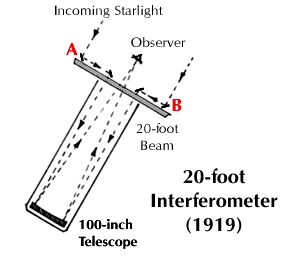 Diagram shows how the 1920 experiment worked [Mount Wilson Observatory]Two astronomers did so back in 1920. They used a new telescope at Mount Wilson Observatory in California — the largest in the world. But they added something extra — a pair of small mirrors attached to a wide frame that was mounted atop the telescope. The mirrors were about 20 feet apart. They gathered the light from Betelgeuse, and directed it to the telescope’s main mirror.

The extended mirrors provided two separate beams of light from the star, which were then combined. That combined view was as sharp as the view from a single mirror as wide as the separation between the two small mirrors. That allowed the astronomers to see Betelgeuse as a disk, not just a pinpoint. They measured the size of the disk at hundreds of times the diameter of the Sun — the first confirmation that stars could grow to such giant proportions.

Despite that early success, it took a while for interferometry to catch on. More about that tomorrow.