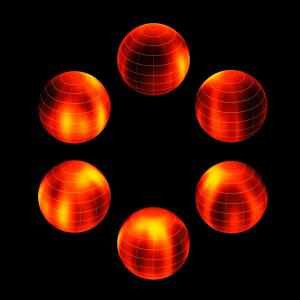 Clouds rotate across the surface of a brown dwarf in this series of images snapped by the Very Large Telescope in Chile. The images were snapped roughly 48 minutes apart. The brown dwarf, known informally as Luhman 16B (after its discoverer), is about six light-years from Earth. It is more massive than a planet, but not massive enough to ignite nuclear fusion in its core and shine as a star. Like a star, though, it is made of gas. It is cool enough for molecules to condense to form solid particles in its upper atmosphere. These particles then form clouds. Astronomers have discovered clouds on several other brown dwarfs as well. [ESO/I. Crossfield]

The objects known as brown dwarfs are oddballs. They’re heavier than planets, but not heavy enough to trigger the nuclear reactions that would make them shine as true stars. In fact, they’re often described as failed stars.

Yet they share some traits with both stars and planets. Like stars, their surfaces are hot, with temperatures of up to several thousand degrees. But like planets, those surfaces may be topped by layers of clouds and giant storms.

Astronomers have discovered “weather” on the surfaces of several brown dwarfs. They can’t actually see the clouds and storms. But they know they exist because the brown dwarfs get fainter and brighter in different wavelengths as they rotate. The sometimes-dramatic change in brightness indicates that the surface of a brown dwarf consists of layers of clouds with embedded storm systems.

The clouds and storms are quite different from those on Earth, though. The clouds are so hot that they’d be made of small particles of iron or silicon, not water. And the storms might be a lot like Jupiter’s Great Red Spot — cyclones big enough to swallow an entire planet.

Indeed, a stormy brown dwarf might look a lot like Jupiter, with bands of clouds circling all the way around it, and big storms whirling through the clouds. But the brown dwarf would also provide its own inner glow — its heat would make it shine dull red or orange, with the clouds forming dark bands across its stormy surface. 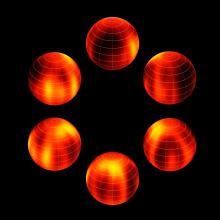