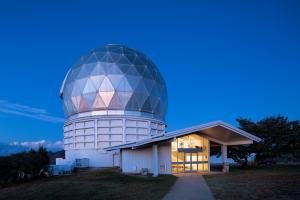 Astronomers and friends are gathering at McDonald Observatory on April 9 to rededicate the giant Hobby-Eberly Telescope, which has undergone an extensive upgrade. New optics provide a wider view of the sky, while new instruments will enable searches for dark energy, planets in other star systems, and other wonders of the universe. [Ethan Tweedie Photography]

Astronomers and friends are gathering at McDonald Observatory in West Texas today to celebrate a major upgrade to the giant Hobby-Eberly Telescope. Over the last few years, much of the telescope’s optics and instruments have been replaced. That’s providing a wider look at the night sky, and allowing the telescope to use more of its main mirror. All of that enhances HET’s scientific capabilities, allowing astronomers to tackle new projects.

One of those projects is HETDEX — the Hobby-Eberly Telescope Dark Energy Experiment. It’s measuring the properties of a million galaxies that are roughly 11 billion light-years away. That means the telescope is seeing those galaxies as they looked when the universe was quite young.

The project’s goal is to see how the rate at which the universe is expanding has changed over the eons.

All but a few galaxies are moving away from us — the result of the expansion of the universe itself caused by the Big Bang. A couple of decades ago, astronomers discovered that the universe is expanding faster as it ages. That extra kick has been credited to “dark energy.” But just what dark energy is remains a mystery. It could come from the vacuum of space, or from one of several other possible explanations.

By looking at galaxies in the early universe, HETDEX will show how the rate of expansion has changed over time. That will help theorists narrow down the range of possibilities — and perhaps solve the mystery of dark energy.