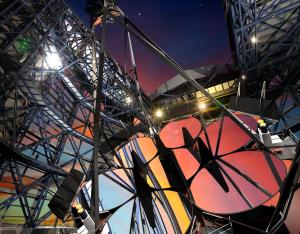 The fading sunlight reflects off the mirrors of the Giant Magellan Telescope, which is under construction in Chile, in this artist's concept. The mirrors, with a combined area larger than a tennis court, will allow astronomers to see deep into the early universe and to take pictures of planets orbiting other stars. McDonald Observatory is one of several partners in the telescope. [GMTO]

When it comes to seeing deep into the universe, size matters. A big telescope gathers more light than a small one, allowing it to see objects that are fainter and farther away. And astronomers are working on a handful of giant telescopes that are scheduled to come on line in the next decade. Their main mirrors, which gather starlight, will be big enough to hold a tennis court. That will allow them to see back to shortly after the Big Bang.

The first of these new behemoths is GMT — the Giant Magellan Telescope. Its main mirror will consist of seven segments, each of which is as big as the largest single telescope mirrors in use today. Each segment will have a slightly different curvature, allowing them to work together as a single mirror.

The telescope will use a technique known as adaptive optics to sharpen its view of the heavens. This technique uses a set of smaller mirrors to compensate for the blurring effects of Earth’s atmosphere.

GMT is being built atop an 8,000-foot mountain in the Atacama Desert of Chile. The air is clear and steady, with few clouds to spoil the view. And the site is remote, so the skies are nice and dark.

Among other things, GMT will allow astronomers to study planets in other star systems and look back to the beginnings of the universe. More about that tomorrow.