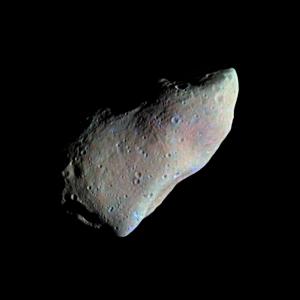 The Galileo spacecraft snapped this image of Gaspra, a small asteroid, during its transit of the asteroid belt in 1991. The color has been enhanced to show subtle differences in surface composition. It was the first encounter by a spacecraft with any asteroid. This image was shot from a distance of more than 3,000 miles (5,000 km), and it the sharpest of Galileo's pictures of Gaspra. Gaspra was discovered in July 1916, and was named for a resort in Crimea. [NASA/JPL]

A break-up can be tough — especially if you’re an asteroid. A collision can break a big asteroid into thousands of little ones.

One of the likely offspring of such a collision was discovered 100 years ago today. It gained fame 75 years later as the first asteroid ever to be studied from close range.

Russian astronomer Grigory Neujmin discovered the asteroid in 1916. He named it Gaspra for a resort in Crimea.

The asteroid orbits near the inner edge of the asteroid belt — a band of rocky debris between the orbits of Mars and Jupiter. Because of its orbit, astronomers classified it as a member of a family of asteroids named for its largest member, Flora. A large impact may have shattered Flora, sending chunks of rock and ice flying off on their own.

Gaspra is so small and far away, though, that not much else was known about it until 1991, when the Galileo spacecraft flew just a thousand miles from it on the way to Jupiter.

Galileo found that the asteroid is shaped a bit like a spearhead, and it’s about 12 miles long. The craft’s pictures revealed lots of small impact craters on Gaspra, but not many big ones. That suggests that the surface is no more than a few hundred million years old — supporting the idea that it’s a chip off a larger body.

That scenario is also supported by long, wide grooves on the surface — possible fractures caused by the impact that may have broken up a big asteroid and created a whole family of little ones.