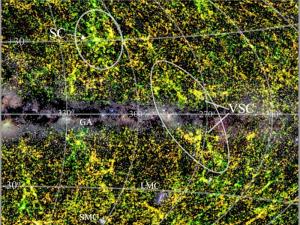 Sailing Through the Galaxies

A map of many galaxies spread across the sky reveals a concentration of them in the constellation Vela, the sail. Known as the Vela Supercluster (VSC in this image), it may contain tens of thousands of galaxies spread across hundreds of millions of light-years of space. The supercluster was discovered only recently, in part because some of it is hidden behind the Milky Way galaxy (dark band across the middle of the image). [Thomas Jarrett/UTC]

The constellation Vela sails quite low across the southern horizon around midnight — but only from about the southern half of the United States. From the northern states, it stays below the horizon and out of sight.

Because of that, astronomers can’t really look at that region of space with telescopes in the U.S. But a recent study using telescopes in the southern hemisphere found something big. Really big: A supercluster of galaxies that may span hundreds of millions of light-years.

A supercluster is made up of many galaxy clusters, each of which may contain hundreds or thousands of individual galaxies. That makes a big, prominent wall of galaxies across the universe.

But the Vela supercluster is hidden behind dense clouds of stars, gas, and dust in the disk of our home galaxy, the Milky Way. That partially blocked the view of the supercluster.

Over the last few years, though, astronomers observed galaxies in that region with telescopes in South Africa and Australia. They found several clusters packed tightly together, centered at roughly 800 million light-years away — a new supercluster. The astronomers hope to use some new telescopes in the coming years to better define this giant wall of galaxies.

And if you’re south of about Kansas City, look for Vela due south around midnight, just above the horizon. It contains only a couple of bright stars — residents of our own galactic home.