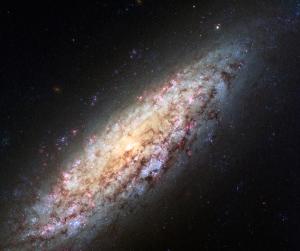 NGC 6503 is a beautiful spiral galaxy spinning through the constellation Draco, the dragon. It is about 18 million light-years away, and spans about 30,000 light-years, which is less than one-third the size of our home galaxy, the Milky Way. It contains tens of billions of stars. The visible universe contains more than 100 billion galaxies, ranging from mere puffballs to behemoths much larger than the Milky Way. Because they are self-contained systems of stars, gas clouds, and planets, they are often called "island universes." [NASA/ESA/D. Calzetti (Univ. Mass.);H. Ford (Johns Hopkins Univ.)/Hubble Heritage Team]

There are lots of ways to think of galaxies. We might look at them as cosmic cities, each with a densely populated “downtown” and more thinly settled suburbs. More poetically, we might think of them as “island universes” — collections of stars, gas, and all the other stuff that makes up the universe, all in one big, bright, beautiful package.

These giant agglomerations are dynamic — they grow and evolve. Their clouds of gas and dust collapse to give birth to stars, for example. That can happen steadily, like the drip of a leaky faucet — just what’s happening now in our home galaxy, the Milky Way. Or it can happen in a hurry, like the rush of a fire hose — usually when two galaxies interact with each other — passing close to each other, or even merging.

In fact, big galaxies like the Milky Way probably got so big through mergers. In the early universe, most galaxies were pretty small. They were packed together so tightly, though, that their gravity pulled them together. Today, big galaxies continue to grow by gobbling up smaller ones; the Milky Way is ingesting several right now.

Gravity also holds together big groups of galaxies, known as clusters. And we’ll talk about one of the most impressive clusters tomorrow.