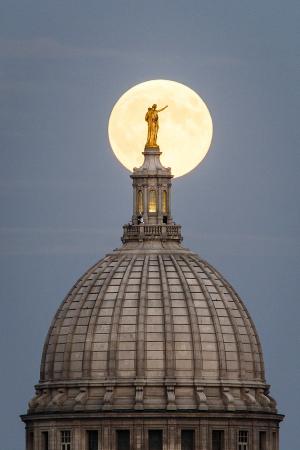 The full Moon shines brightly behind the Wisconsin state capitol in this September 2015 view. It was a "supermoon," which has become a popular term over the last couple of years for a full Moon that is closer to Earth than average, making the Moon appear a tiny bit larger than normal. The full Moon of November 14 is a supermoon as well. According to the U.S. Naval Observatory, it will be 356,520 kilometers (221,399 miles) from Earth at the moment of full Moon, 7:52 a.m. CST  (it rises around sunset on the night of November 13). That is roughly 17,000 miles closer than the average Earth-Moon distance. The Moon actually will be closest to Earth at 5:15 a.m., which will mark its closest approach since 1948. The Moon will shine a bit brighter than average, but most skywatchers won't be able to tell much of a difference in its size. [Jeff Miller/UW-Madison]

The Moon will be full early tomorrow, so for the next couple of nights it rises around sunset and soars high overhead during the night. Tonight, it’s in the southeastern corner of Aries, near the border with the adjoining constellation Cetus.

The silvery lunar glow looks especially cold at this time of year, as the warmth of early autumn begins to give way to the chill of winter. In fact, the full Moon of November is known as the Frost Moon.

Thanks to the Apollo missions and other observations, we know today that the Moon is a dead ball of rock. The lighter portions of its surface are ancient highlands, while the dark features of the “Man in the Moon” are smooth plains of younger volcanic rock.

That’s hardly a romantic image for our satellite world. In ages past, though, the Moon was perhaps the most romantic figure in the sky. Almost every culture developed fanciful stories to explain its creation, appearance, and cycle of phases. In many of those stories, the Moon was a goddess.

It’s easy to envision the Moon’s power in these and many other cultures on long, chilly nights, when the full Moon casts its “frosty” light on the landscape — all night long.