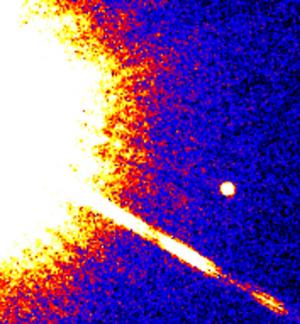 A tiny brown dwarf glows next to its stellar companion, Gliese 229, in this false-color image from Hubble Space Telescope. The brown dwarf, known as Gliese 229B, is a "failed star" -- an object that is more massive than a planet, but not massive enough to ignite nuclear fusion and shine as a true star. Gliese 229 is one of our closest stellar neighbors, at a distance of about 20 light-years. [NASA/JHU/Caltech]

The brightest star visible in Lepus, the rabbit, is a stunner. It’s more than 30,000 times brighter than the Sun, so it’s easily visible to the unaided eye even though it’s more than 2,000 light-years away.

The constellation’s closest star is less than 20 light-years away. Yet it’s so feeble that you need a telescope to see it. And it has a small companion that’s even fainter: a cool ember known as a brown dwarf.

Gliese 229 is smaller and less massive than the Sun, which is the key to its faintness. A lightweight star burns through the nuclear fuel in its core much more slowly than a heavy star. That generates much less energy, so there’s not much for the star to radiate into space.

The brown dwarf companion — Gliese 229B — probably doesn’t produce any energy in its core. It’s a few dozen times the mass of Jupiter, the largest planet in the solar system. That’s just not big enough to ignite nuclear fusion and allow it to shine as a true star.

Gliese 229B probably formed like its bigger companion, from the collapse of a cloud of gas and dust. The cloud split apart, producing two separate objects. But there wasn’t enough material in Gliese 229B’s part of the cloud to make a star. Instead, it made a faint cosmic ember — a brown dwarf.

Lepus hops below the feet of Orion, which is high in the sky at nightfall. The rabbit’s brightest star is easy to spot, but Gliese 229 remains invisible — a close neighbor hidden from sight.