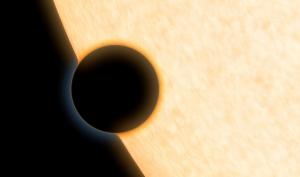 This artist's concept of the planet known as HAT-P-11b shows how astronomers can discover and study the atmosphere of a planet in another star system. As the planet crosses in front of its star, some of the starlight passes through the planet's atmosphere. Analysis of the light can reveal the atmosphere's chemical composition. [NASA/ESA/JPL]

Like most people, many scientists believe there’s some type of life on other planets. It could be as simple as microbes, or as complex as the plant and animal life here on Earth.

But there’s a huge gap between believing that something’s there and actually proving it. And so far, there’s no confirmed evidence of life on any world other than our own. Yet astronomers are already trying to tease out that evidence on exoplanets — worlds that orbit stars other than the Sun.

Life on Earth produces elements and compounds that are rarely found without life, such as oxygen and methane. So if one of these “biomarkers” turns up in a planet’s atmosphere, it increases the odds that something is living there. And if more than one biomarker is found, especially at high concentrations, then it’s a good bet that it’s a living world.

Astronomers have used this technique to study the atmospheres of several planets. So far, though, they haven’t found any biomarkers — the signature of life on another world.