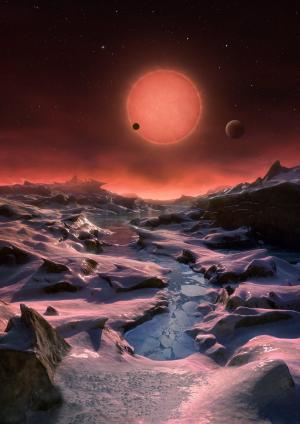 The faint star TRAPPIST-1 glows above the surface of one of its three known planets in this artist's concept. Another planet is crossing in front of the star, while the third appears just to the side. Two of the three planets are just outside the star's habitable zone, where temperatures are just right for liquid water. It's possible, though, that some regions of the planets could receive the right amount of starlight to be habitable. [ESO/M. Kornmesser]

The Moon is passing through a well-known sign of the zodiac right now: Aquarius. Most of the stars that form the water bearer’s classical outline stand to the left of the Moon.

One recently discovered treasure in Aquarius is a star system that contains three Earth-sized planets.

TRAPPIST-1 is only 40 light-years from Earth — just down the block by stellar standards. The star is less than one-thousandth as bright as the Sun, though, so you need a good-sized telescope to see it.

The three planets orbit quite close to the star. And two of them appear to be just outside the bounds of the star’s habitable zone. That’s the distance from the star where temperatures are just right for liquid water, which is a key ingredient for life. But it’s possible that regions on these planets, which receive more or less starlight than average, could be habitable.

Some of those giants could have moons with the right conditions for life, though. In fact, so could planets outside the habitable zone. So some astronomers are starting to search not just for exoplanets, but for exomoons. More about that tomorrow.