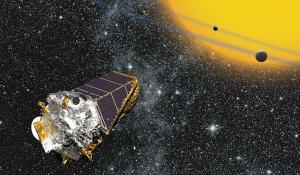 This artist's concept shows how Kepler Space Telescope discovers planets in other star systems. The telescope looks for a planet to pass in front of its star, blocking a bit of the star's light, making it look slightly fainter than normal. (Kepler operates from Earth orbit, so it never sees any star as more than a pinpoint of light, however.) Kepler has discovered thousands of confirmed or possible planets, even though it is a relatively small telescope. Even smaller telescopes on the ground also are discovering exoplanets. [NASA/W.Stenzel]

It feels like every time astronomers even look at a star these days, they find a planet or two in orbit around it. They’ve confirmed about 3500 planets in all, with thousands more awaiting confirmation. The planets range from about the mass of the Moon to many times the mass of Jupiter, the largest planet in the solar system. Some are quite close to their parent stars, while others are far away. And some orbit a single star, while others have two suns in their sky — or even three.

One amazing thing about these discoveries is that, in an era of giant telescopes, most of the exoplanets were found with small telescopes.

Most of the planets were discovered with Kepler Space Telescope. The spacecraft looks for a small dip in a star’s light caused by a planet passing across its disk. And it does so with a main mirror that measures just three feet across — quite small by modern research standards.

Many ground-based planet searches are done with even smaller telescopes, which devote all their time to hunting planets. A robotic network known as HAT, for example, has discovered almost 60 planets with telescopes that consist of 200-millimeter camera lenses. And a telescope known as KELT-North, which uses an 80-millimeter lens, has discovered four confirmed planets.

These little telescopes are helping make some big discoveries about worlds in other star systems.

We’ll talk about some of the worlds these telescopes are finding tomorrow.