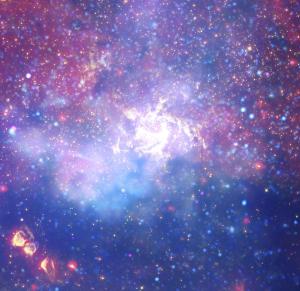 A supermassive black hole four million times the mass of the Sun inhabits the center of this bright swirl of stars, gas, and dust at the heart of the Milky Way galaxy. The black hole is so small, though, that it has not yet been seen directly, even in this image, which combines views from several large space telescopes. But a new project is combining the power of many telescopes to try to resolve the black hole. [NASA/JPL-Caltech/ESA/CXC/STScI]

Astronomers have cataloged thousands of black holes. Some of them are the remnants of collapsed stars. Others, found in the hearts of galaxies, are millions or billions of times the mass of the Sun. Yet so far, no one has actually seen even a single black hole.

In part, that’s because black holes produce no energy at all. And they’re also tiny targets; a black hole that’s a hundred times the mass of the Sun is only a few hundred miles in diameter. Supermassive black holes are much bigger, but they’re so far away that they’re too small for current telescopes to see.

So astronomers infer the presence of black holes from their effects on the visible matter around them. They discovered the black hole at the center of the Milky Way in part by plotting the orbits of the stars that are close to it. The speeds of those stars mean they’re being pulled by something that’s heavy, but smaller than our own solar system.

Astronomers are hoping to actually see that black hole soon. They’re combining a dozen radio telescopes across the globe to create the Event Horizon Telescope. It’ll look at the center of the galaxy to try to see the event horizon — the boundary between the black hole and the space around it. That technique could allow them to see the black hole, which would look like a silhouette against the background of stars and gas, with a thin ring of light around it.

The first observations are scheduled for this month — an attempt to see a black hole.