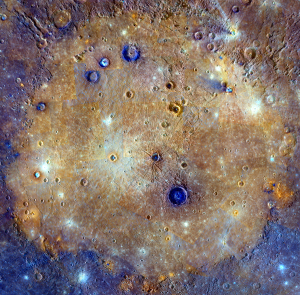 Young craters and deposits of volcanic rock highlight this enhanced-color view of Caloris Basin, the largest feature on the planet Mercury. The basin is an impact crater that's about a thousand miles (1,600 km) wide. The collision that created it may have created seismic waves that raced all the way around the planet, creating a region of jumbled terrain on the opposite side of Mercury. In this image, which is a mosaic of many images from the Messenger spacecraft, young craters (blue) show material excavated from deep below the surface. The bright orange regions around the basin appear to be recently deposited lava. [NASA/JHUAPL/Carnegie Inst. of Washington]

One of the largest features on Mercury is also one of the planet’s hotspots. The Sun stands high above it every other time Mercury passes closest to the Sun. As a result, noontime temperatures can reach 800 degrees Fahrenheit. Because of that, it’s called the Caloris Basin — from the Latin word for “heat.”

In fact, it has an even hotter history. It probably formed billions of years ago, when a giant asteroid slammed into Mercury. The impact gouged a crater that’s a thousand miles wide. Molten rock bubbled up from below, coating the crater floor with smooth volcanic rock.

The effects of the impact were felt far and wide — all the way around the planet. There’s an area of chaotic terrain on the exact opposite side of Mercury from Caloris Basin. That region could have been sculpted by seismic waves from the impact. The waves might have raced around the planet and convered on the opposite hemisphere, rattling the crust and creating a jumble of hills, ridges, and valleys.

And Caloris Basin continues to show effects from its formation. Narrow cracks in the basin floor appear to be emitting volcanic gases — helping to create a thin atmosphere for the battered little planet.

And Mercury is in view in the western sky in early evening right now. It looks like a bright star, but it’s quite low in the sky as twilight begins to fade away, so you need a clear horizon to spot it. It’ll remain in view for a few more days.