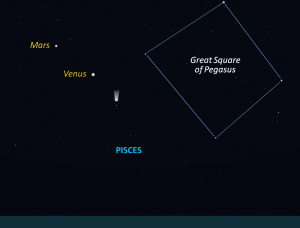 Encke's Comet pushes into the evening sky in February and March, and should be bright enough to see with binoculars. This chart is looking west about 90 minutes after sunset. The comet's position is shown for February 16, although its brightness is greatly exaggerated. After that, Encke will move up and to the left for a few days before circling back down toward the horizon. It will grow brighter as it drops, but will soon be lost in the twilight.

A faint but reliable comet is putting in an appearance in the evening sky right now, although you need binoculars or a telescope to see it. It should get a bit brighter over the next couple of weeks before it disappears in the Sun’s glare.

Encke’s Comet was first recorded in 1786. A few decades later, German astronomer Johann Franz Encke connected that first appearance with several others in the intervening years. He calculated the comet’s orbit, and predicted its next return. When it showed up as predicted, it was named in his honor.

Like all comets, Encke is a ball of rock and ice. It orbits the Sun once every 3.3 years. When it comes closest to the Sun, the extra solar energy warms the comet, vaporizing some of its ices. The gas flows out into space, along with tiny particles of dust. This material forms a glowing cloud around the comet. Sunlight and the solar wind push some of the gas and dust away from the comet, forming a tail.

Encke will pass closest to the Sun in less than a month, so it’s shining at about its brightest. Right now, it’s not far to the lower right of Venus, the brilliant “evening star,” which is in the west at sunset. The comet is dropping toward the horizon, though, so it moves a little farther from Venus, and a little lower in the sky, each evening. It’s getting brighter, too, which will make it an easier target for binoculars — until it disappears in the evening twilight in early March.