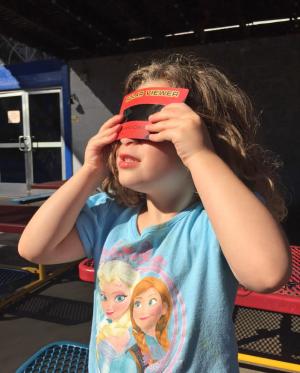 The August 21 solar eclipse will be one of nature's grandest spectacles. But it requires special protection for safe viewing, such as special eclipse glasses (shown) or dark welder's glass (No. 14 or darker). Sunshades, exposed photographic film, and other makeshift solutions do NOT provide adequate protection for viewing the partial phases of the eclipse. The only time it's safe to view the eclipse without protection is during totality, when the Moon completely covers the solar disk. [Jay Pasachoff]

Venus, the “morning star,” looks down on the Moon at first light tomorrow. It’s one of the most beautiful of all astronomical encounters. But the Moon is headed toward an even more spectacular encounter on Monday, when it crosses in front of the Sun, creating a total solar eclipse. It’ll be visible across a narrow path from Oregon to South Carolina.

But the couple of minutes when the Sun disappears are only part of the eclipse experience. The Moon will partially eclipse the Sun for about an hour and a half before and after totality. In fact, a partial eclipse will be visible across the entire United States, with the Moon covering most of the Sun’s disk across most of the country.

It’s completely safe to look at the total phase of the eclipse — when the Sun is totally covered. But it’s dangerous to look at any other phase. The Sun is so bright that even a sliver of it can damage your eyes.

But there are ways to safely view the partial eclipse. One is to look through special eclipse viewers or a piece of welder’s glass — number 14 or darker.

Another is to poke a hole in a piece of cardboard and let the sunlight shine on the ground or a piece of paper; the hole creates an image of the eclipse. So do the leaves of a tree. If you stand beneath a tree with lots of leaves, but not so many that they block out the sky, you can see hundreds of eclipses projected on the ground — a safe and beautiful way to enjoy an astronomical spectacle.