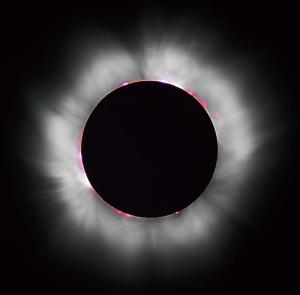 Astronomers will pay special attention to the Sun's hot outer atmosphere, the corona, during Monday's solar eclipse. It will form a silvery halo around the intervening Moon. The corona is millions of degrees hotter than the Sun's surface, but astronomers are not yet certain what heats it. They will be watching the eclipse from the ground and from aircraft to try to gather clues about this solar mystery. [Luc Viatour]

Astronomers have been studying the Sun for so long that you might think they know everything there is to know about it. And they do know quite a bit. It’s a hot ball of gas that’s 865,000 miles wide. It’s powered by nuclear reactions deep in its core. And it’s been shining for billions of years, and will keep going for billions of years more.

Yet there are still some mysteries about the Sun. At the top of the list is what heats its outer atmosphere, the corona. Although it’s quite thin, it’s millions of degrees hotter than the surface of the Sun, and scientists aren’t sure why.

The corona most likely is heated by energy from the Sun’s magnetic field. The field creates dark sunspots, powerful explosions, and outbursts of billions of tons of charged particles. Those events impart some energy to the corona, but not nearly enough to account for its temperature.

Solving the mystery requires more observations of the corona, but they’re hard to get. The Sun’s disk is a million times brighter than the corona, so it overpowers the faint wisps of gas. Satellites can block out the Sun, but they block the inner part of the corona as well.

So the only time scientists get a good look at the corona is during a total solar eclipse — like the one coming up on Monday. As the Moon covers the Sun, the corona will shine around the Moon. So astronomers will probe the corona with telescopes on the ground, in the air, and in space; more about that tomorrow.

For more about the eclipse, visit our special eclipse site