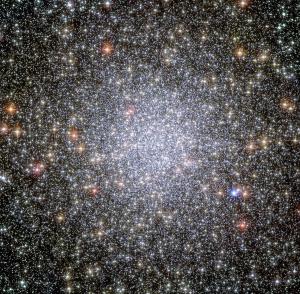 This Hubble Space Telescope view shows the core of 47 Tucanae, a globular cluster in the southern constellation Tucana, the toucan. The cluster is about 15,000 light-years away, and contains hundreds of thousands of stars. One of its residents is a possible binary containing a black hole and a white dwarf, which is the "corpse" of a once-normal star like the Sun. The two are so close together that the black hole appears to be stealing material from the surface of the white dwarf. [NASA/ESA/Hubble Heritage (STScI/AURA)/Hubble Collaboration]

A dead star in a distant cluster is facing a fate worse than death: complete annihilation. That’s because the star may orbit just 600,000 miles from a black hole — closer than any other black-hole companion yet seen.

This odd system is known as 47 Tucanae X9. It’s in a globular star cluster in the southern constellation Tucana, the toucan. The cluster is about 15,000 light-years from Earth.

Astronomers have watched X9 for years because it’s one of the brightest sources of X-rays in the cluster. X-rays are an indication that something powerful is going on.

Recent observations with the space-based Chandra X-Ray Observatory suggest that the system consists of a white dwarf and a black hole. A white dwarf is the dead core of a once-normal star. It’s about as big as Earth, but almost as heavy as the Sun.

The recent X-ray observations show that the likely white dwarf orbits the black hole about twice an hour, which tells astronomers that the two are quite close.

They’re so close, in fact, that the black hole appears to be stealing gas from the surface of the white dwarf. This material forms a wide, thin disk around the black hole. As material in the disk spirals toward the black hole, it gets extremely hot, so it emits X-rays.

Over time, the black hole could consume most of the white dwarf, leaving behind an even denser knot of material. On the other hand, it might eat the whole thing — cannibalizing its unlucky companion.