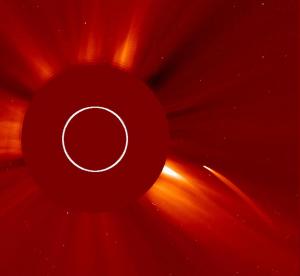 A comet (lower right) streaks toward its doom as it nears the Sun in this image from SOHO, a spacecraft that studies the Sun's extended atmosphere. The comet was a member of a family known as Kreutz sungrazers, which are remnants of a much larger comet that disintegrated centuries ago. These fragments all pass close to the Sun, and most of them vaporize in the intense heat. The Sun itself is blocked out, allowing the spacecraft to see the Sun's hot but faint corona, which extends far into space. [NASA/ESA/SOHO]

More than 2,000 years ago, a giant comet split apart. And over the intervening centuries, it just kept splitting. Today, many thousands of its fragments zip through the solar system. And they’re all doomed.

These fragments are known as Kreutz sungrazers. They’re named for Heinrich Kreutz, the German astronomer who first studied them, in the late 1800s.

The original comet was perhaps 50 or 60 miles in diameter or even bigger — many times the size of most comets. It probably broke apart sometime between the fifth and third centuries B.C., leaving two giant remnants.

About a millennium ago, those remnants also broke up — this time into many smaller fragments. And the breaking-up business continued, producing many thousands of pieces — some still fairly large, but most the size of a house or smaller.

All of them follow dangerous orbits — they skirt just 30,000 miles or so from the Sun. As they approached the Sun, some of the bigger ones have produced some of the brightest comets in history. Yet it’s likely that only a few have survived their close passage — most of them vaporize.

In fact, a spacecraft has seen that happen over and over. SOHO, which was launched in 1995, blocks out the Sun itself, allowing it to monitor the Sun’s outer atmosphere. During that time, it’s seen more than 3,000 comets vaporize as they passed close to the Sun. About 85 percent of them are Kreutz sungrazers — the doomed offspring of a mammoth comet.