The Dog Star is just beginning to emerge from the Sun’s glare in the dawn sky. According to tradition, that means we’re just getting into the Dog Days of summer.

Sirius is the brightest star in the night sky. It’s climbing into view in the morning glow of the brightest star in all the sky — the Sun. Sirius is quite low in the east-southeast shortly before sunrise. It’s best seen from the southern tier of states, although it’ll pull into better view from the northern states over the coming days and weeks.

Sirius is also the leading light of the constellation Canis Major, the big dog, so it’s known as the Dog Star. And that’s where we get the name for this part of summer — the Dog Days.

Sirius makes its closest approach to the Sun in our sky during the summer, disappearing for a few weeks in the Sun’s glare. In ancient times, it returned to view in the morning by early July — just as the weather was reaching its hottest. At the time, it seemed logical to associate the bright star with the sweltering weather. So the people of ancient Greece and Rome named the period of the year after Sirius returned to view in the star’s honor.

Thanks to an effect known as precession, over the centuries the stars shift position with respect to the Sun. So Sirius now returns to view a few weeks later than it did thousands of years ago. So the heat is in full force at northern latitudes — the Dog Days of summer. 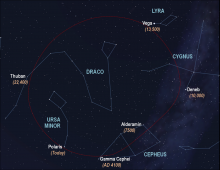