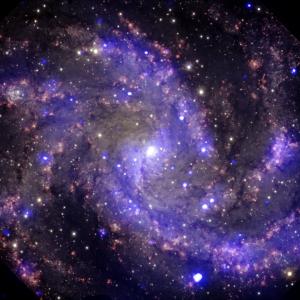 The beautiful spiral galaxy NGC 6946 has been the site of some spectacular fireworks. Over the last century, astronomers have detected 10 exploding stars, known as supernovae, in the galaxy, which is more than any other galaxy. Because of that prolific display, NGC 6946 is also known as the Fireworks galaxy. This image, which combines X-ray (purple) and visible wavelengths, shows massive gas clouds in the galaxy's spiral arms. The gas clouds are nurseries where new stars are born. The most massive of these new stars quickly burn out and explode, adding to the fireworks. [NASA/CXC/MSSL/R.Soria et al; Optical: AURA/Gemini Observatory]

NGC 6946 is both beautiful and busy. It’s a spiral galaxy that we see face-on, providing a glorious view of its delicate spiral arms. And over the last century, astronomers have recorded 10 supernova explosions in the galaxy — the most recent just three months ago. That’s earned NGC 6946 a nickname: the Fireworks galaxy.

The number of firecrackers could have been even higher. But instead of exploding, one of the galaxy’s massive stars simply winked out of existence. That means it might have collapsed to form a black hole.

For a long time, theory has said that any star born with more than about eight times the mass of the Sun should end its life as a supernova. The titanic blast rips the star’s outer layers to bits, while the core collapses to form a neutron star or a black hole.

In recent years, though, astronomers have started to suspect that the most-massive stars skip right past the explosion part. They may start to explode, but as the core collapses to form a heavy black hole, its gravity grabs the exploding material and pulls it in.

An example of that may be the star in NGC 6946. Earlier this year, a team of astronomers reported that, in 2009, the star began getting brighter. But by 2015, it had vanished. There was no explosion, no debris — nothing at all. The team concluded that the star collapsed to form a black hole — depriving the Fireworks galaxy of another bright display.