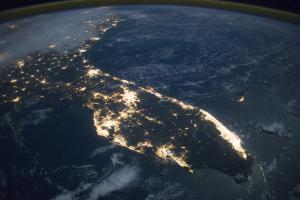 The cities of Florida glow brilliantly in this 2012 view from the International Space Station. From the ground, the light sources blot out the view of the night sky. New LED streetlights can help reduce the glare, although those with bluer colors can make things worse. [NASA/JSC]

A big light pollutes the sky tonight: the full Moon. Its glare blocks faint stars from view. But the Moon is so beautiful that it’s worth a little inconvenience — and besides, there’s not a thing we can do to change it.

But we can change other sources of light pollution — the glow of civilization. The International Dark Sky Association says that because of that glow, 99 percent of the American population lives under light-polluted skies. And new light fixtures have the potential to make the problem worse.

Many cities have been switching to LEDs for their streetlights. They last longer than older technologies, and they use less energy.

The problem, though, is that most LEDs produce a lot of blue light. A recent report by the American Medical Association says that blue light scatters inside the eye, clouding your vision. It can also interfere with sleeping patterns. And, in fact, some cities that installed LED lights have had complaints from the neighbors.

Blue light also scatters more in the sky; that’s why the daytime sky is blue. So blue light shining into the sky makes it harder to see the stars.

Fortunately, though, newer LEDs are available in warmer colors than older models. With less blue light, there are fewer problems for residents. Phoenix decided to install almost a hundred thousand of these fixtures, and a city in California replaced its blue LEDs with the warmer ones.

That makes it easier to sleep, drive — and enjoy a dark night sky.