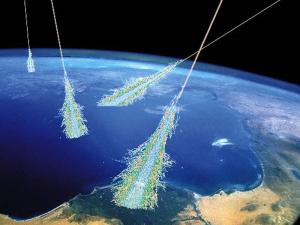 Showers of subatomic particles caused by cosmic rays rain down on Earth in this artist's concept. The most energetic cosmic rays are particles blasted into space by supernova remnants, supermassive black holes, or other powerful objects. When they reach Earth, they strike atoms and molecules in the upper atmosphere. That creates cascades of other particles that eventually reach the surface. [Simon Swordy (Univ. Chicago)/NASA]

Our planet is constantly pelted by energy and particles — from sunlight to tiny grains of comet dust. But some of the particles that hit us may come from a great deal farther — from black holes and exploding stars in other galaxies.

These particles are known as cosmic rays. Most of them are bare protons — the nuclei of hydrogen atoms. A few are the nuclei of helium atoms, while about one percent come from even heavier elements.

Cosmic rays were discovered more than a century ago, but the details of their origin remain a bit mysterious. In part, that’s because they don’t travel to us in a straight line. They have an electric charge, so they’re pushed around by magnetic fields. Since they zigzag through space before reaching Earth, we can’t trace where they come from.

But studying the types of particles that make up cosmic rays provides some clues. The proportion of heavy elements is much higher than in the universe overall, for example. That suggests that many cosmic rays come from heavy-element factories — the exploding stars known as supernovae. Such a star produces some of the elements before it explodes, and others during the blast itself. It also produces a shockwave that could accelerate the particles to almost the speed of light.

Some cosmic rays may be created by giant black holes in the hearts of distant galaxies — particles dispatched across the vast cosmos many millions of years ago.