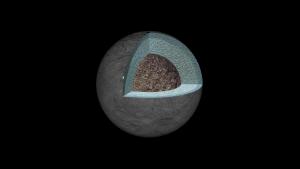 Ceres, the largest resident of the asteroid belt, consists of a layers, as determined by the orbiting Dawn spacecraft. The core consists of metal and rock. Outside that is a layer of water and ice, topped by a crust of rock and dirt. Some of the water may periodically gush to the surface, where it vaporizes into space, leaving behind bright mineral deposits. [NASA/JPL-Caltech/UCLA/MPS/DLR/IDA]

At first glance, the largest resident of the asteroid belt looks kind of dull. Its brownish surface is pockmarked by thousands of impact craters, much like the Moon and many other bodies — a world of little interest.

But a more detailed look reveals some remarkable features. There’s a mountain made of ice, for example, along with deposits of salts that may have bubbled up from an ocean below the surface.

Ceres is about 600 miles across — a quarter the diameter of the Moon. And it contains more than a quarter of all the material in the asteroid belt — a ring of debris between the orbits of Mars and Jupiter.

The Dawn spacecraft has been orbiting Ceres for more than two years. Its observations have supported the idea that there’s a lot of water in Ceres. Much of it is mixed with a layer of rock below the crust. But some could form a subsurface ocean.

Some of that water could have bubbled to the surface just four million years ago, inside a wide crater. The water quickly evaporated. But it left behind mineral deposits that are almost pure white — the brightest features on the entire world.

Water also may have formed the largest mountain on Ceres. It’s two-and-a-half miles tall, and its slopes are bright and smooth. An impact by an asteroid may have cracked the crust halfway around Ceres, allowing a mixture of water, ice, and minerals to push up from below on the opposite hemisphere. That built a mountain of ice on this intriguing little world.