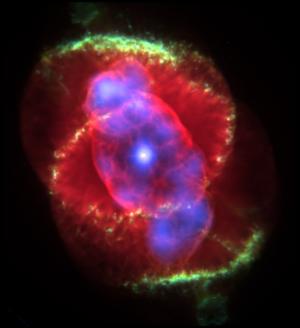 The last gasp of a dying star looks like a work of cosmic art in this composite image from two space telescopes. Known as the Cat's Eye Nebula, it consists of rings of gas and dust blown into space from the star's surface. In time, all the gas in the star's outer layers will blow away, leaving only the star's hot but dead core. In this false-color image, red and green represent an image from Hubble Space Telescope, while blue and purple show X-rays snapped by Chandra X-Ray Observatory. The X-rays come from hotter regions, where one wave of expelled gas overtakes another. [NASA/UIUC/Y.Chu et al./STScI]

It’s often the case that an artist’s work isn’t fully appreciated until after the artist dies. And the same thing is true in the stars. We appreciate a star’s beauty as it twinkles through the night, but its greatest glory — a masterpiece of color and form — is also its final creation.

An example is the Cat’s Eye Nebula, in Draco, the dragon. The faint constellation is in the northeastern sky at nightfall, and slithers high across the north later on.

Photographs reveal swirls and loops of green and red — more like a flower than a cat’s eye. But the nebula’s real beauty is not as a photograph, but as a sculpture. It consists of an elongated bubble of hot gas attached to two bigger bubbles. Jets of gas shoot into space from the tops of the bubbles.

The process that sculpted the Cat’s Eye is the death of its star, which originally was several times as massive as the Sun.

Thousands of years ago, it began throwing off big rings of gas and dust. And about one thousand years ago, it began ejecting its outer layers into space — a process that eventually will leave nothing but its hot, dense core. Ultraviolet energy from the core lights up the expanding bubbles of gas, making them glow. And the nebula’s shape may be sculpted by the gravity of a small companion star.

The Cat’s Eye Nebula is expanding at tens of thousands of miles per hour. Eventually, it’ll spread so far that it will fade away — and a work of cosmic art will die with its artist.