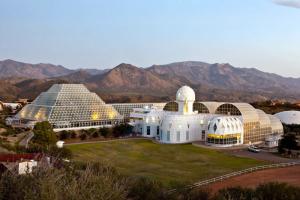 Biosphere 2, a complex designed to simulate Earth's multiple ecosystems, gleams in the Arizona sunset. A team of "biospherians" was sealed the complex on September 26, 1991, to start a two-year mission. The goal was to life off the food and other products generated inside Biosphere 2. One extended goal was to see if people could live in a habitat on another planet, completely cut off from the outside world. The complex includes an ocean, desert, savannah, and other ecosystems. Although the initial experiment wasn't fully successful, Biosphere 2 is still in operation today, conducting other ecological experiments. [Johndedios/Wikipedia]

One of the oddest experiments of the 20th century began 25 years ago tomorrow. Eight volunteers sealed themselves inside Biosphere 2, a miniature replica of Earth built in the desert north of Tucson. It was designed to study environmental problems confronting Earth itself. But a secondary goal was to look at how we might build self-sustaining colonies on other worlds.

The structure itself looked like a cross between a Space Age greenhouse and an ancient Egyptian monument. A multi-level steel framework was covered with thousands of panes of glass. Inside, it included an artificial mountain, an ocean, and livestock pens. About 3800 species of plants and animals were scattered through a desert, a rainforest, and other habitats.

In the first major experiment, the eight “biospherians” were to live in the structure for two years, completely sealed off from the rest of the world.

Yet things didn’t work as planned. Carbon dioxide built up in the air, so they had to use chemicals to remove it. They couldn’t grow enough food, so everyone lost weight. Some plants and animals died, but cockroaches thrived.

The grand experiment wasn’t a grand success. Yet it did show that maintaining a sealed habitat on another world will be even harder than expected.

Today, Biosphere 2 is still operating, although without the two-year runs. Scientists conduct ecological experiments, and it’s a popular tourist attraction — a small-scale Earth in the Sonoran Desert.