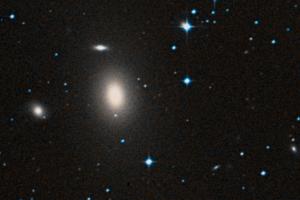 One of the most massive black holes yet discovered resides at the heart of NGC 1600, the large, bright galaxy in this image. The black hole is about 17 billion times the mass of the Sun. Such a heavy black hole would span several times the diameter of our solar system. By comparison, the black hole at the center of the Milky Way galaxy is quite puny, weighing in at just four million times the Sun's mass. [Digitized Sky Survey/STScI/AURA/Palomar/Caltech/UKSTU/AAO]

The black holes that inhabit the cores of most big galaxies come in a range of sizes — from big to wow! The one at the heart of the Milky Way is in the “big” category — about four million times as massive as the Sun. But those in the “wow!” category can be more than a thousand times heavier. In fact, one recent study said that, under the right circumstances, such black holes could max out at about 50 billion times the Sun’s mass — heavier than some galaxies.

One recently discovered super-monster is in the galaxy NGC 1600, a couple of hundred million light-years away. It’s perhaps 17 billion times as massive as the Sun. But observations of stars that orbit the black hole suggest that it may actually be two black holes instead of one. If so, they’d likely be remnants from the merger of two galaxies. Eventually, the black holes themselves may merge as well.

A black-hole binary has been confirmed in a galaxy known as OJ 287. But it’s not an even pairing. The more-massive of the two is 18 billion times the Sun’s mass, while the other is less than one percent as heavy. The smaller black hole orbits the bigger one once every dozen years or so, on a stretched-out path. When it gets close, it plunges through a disk of hot gas that surrounds the bigger black hole twice — once on the way in, and again on the way out. That stirs up the disk and causes bright flares of energy — powered by a dark monster.

Biggest of the Big | StarDate Online