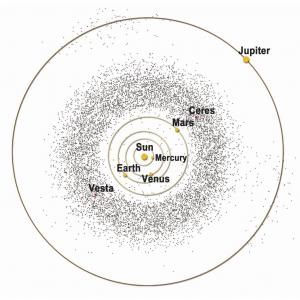 Millions of asteroids orbit the Sun in a wide belt between the orbits of Mars and Jupiter, as shown in this diagram. They are chunks of rock and ice that were left over from the formation of the planets. Jupiter's gravity prevented them from coalescing to form another planet. The largest member of the belt is Ceres, which is being explored by the Dawn spacecraft. As the diagram indicates, other asteroids cross into the inner solar system, while others share the orbit of Jupiter. [McRel]

The realm of the planets is neatly divided into two regions. There’s the region close to the Sun, which contains the small, rocky planets: Mercury, Venus, Earth, and Mars. And there’s the region far from the Sun, with the giant planets Jupiter, Saturn, Uranus, and Neptune.

The two regions are separated by a “dotted line”: the countless bits of rubble that make up the asteroid belt.

When the first asteroids were discovered, more than two centuries ago, many astronomers thought they were the remains of an exploded planet.

It turns out, though, that nearby Jupiter prevented the asteroids from clumping together to make a planet. Its powerful gravity stirred things up so much that when asteroids hit each other, instead of sticking together, they blasted each other apart. Much of the debris from these collisions escaped the asteroid belt. That depleted the supply of planet-making materials. Instead of a planet, the leftovers formed a wide, thin ring around the Sun.

Hundreds of thousands of asteroids have been found so far, with tens of millions more likely awaiting discovery. They don’t add up to much, though — only a few percent of the mass of the Moon.

And despite what you see in the movies, the asteroid belt is mostly empty space. The average distance between asteroids is a million miles or more. In fact, many spacecraft have flown through the asteroid belt with no trouble at all — unmolested by the debris from a planet that never was.