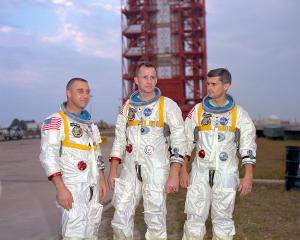 The crew of the planned Apollo 1 mission, astronauts Gus Grissom, Ed White, and Roger Chaffee (l-r), stand in front of the launch pad at Cape Kennedy days before they were killed during a launch dress rehearsal. A fire broke out in the cockpit on January 27, 1967, less than a month before their planned launch, quickly killing all three men. NASA found multiple problems with the spacecraft itself and with the overall design. An intensive effort to solve the problems led to the launch of the first manned mission, Apollo 7, 21 months later, and the first lunar landing nine months after that. [NASA]

Some star names are ancient — they’ve been around since the dawn of civilization. Others are more recent. Three names, for example, have been around for only half a century. They were created as practical jokes by the crew of the first planned Apollo mission. Later, they were retained as a memorial to the astronauts after they died in their Apollo 1 spacecraft 50 years ago today.

Gus Grissom, Ed White, and Roger Chaffee were scheduled to head for space in February of 1967. On January 27th, they were going through a dress rehearsal at Cape Kennedy. Several hours in, a fire started inside the cockpit, which was quickly engulfed in flames. Seconds later it ruptured, spreading fire and smoke through the gantry and slowing rescue efforts. By the time the hatch was opened, the astronauts were dead.

An investigation found many problems. There were exposed wires in the cockpit, lots of flammable materials, a pure-oxygen environment, and a hatch that was hard to open. Investigators concluded that NASA got slopply as it raced to the Moon.

The Apollo spacecraft was redesigned, and carried the first astronauts to space in October of 1968 — and to the Moon just two months later.

Those crews navigated through space with the help of several dozen stars, including three named Navi, Dnoces, and Regor — parts of the names of Grissom, White, and Chaffee spelled backwards. And the names are sometimes used even today — a memorial to the crew of Apollo 1.