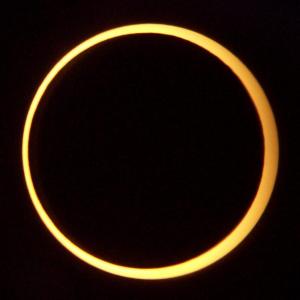 An annular eclipse will grace the skies over parts of Africa on September 1. The Moon will pass in front of the Sun's disk, but won't completely cover it. Instead, a thin, bright ring will encircle the Moon. [Wikimedia]

2016 is a poor year for eclipses, especially from here in the United States. There are no total eclipses of either the Sun or Moon, and no partial eclipses, either.

Residents of Africa, though, will get a pretty good eclipse tomorrow: an annular eclipse of the Sun. The Moon will pass directly between Earth and Sun, blocking most of the Sun’s disk from view. But the Moon is a little farther from Earth than average right now, so it won’t be big enough to cover the entire disk. That’ll leave a thin but brilliant ring of sunlight around the Moon.

For this eclipse, which will last a bit more than three hours, the Moon will cover about 95 percent of the Sun. The ring of sunlight is still bright enough to cause eye damage, though, so eclipse watchers will need to use proper eye protection to look at it directly.

The annular eclipse will cover a narrow path across southern Africa, with the rest of the continent seeing a partial eclipse. But those of us in North America are out of luck — we get no eclipse at all. Things will change next year, though, when a total solar eclipse will slice across the American heartland in August.