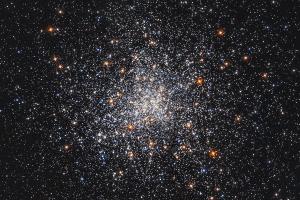 A Burst of Stars

A burst of stars forms Messier 79, a globular cluster in Lepus, the hare. The cluster, which is about 42,000 light-years away, contains roughly 150,000 stars packed into a ball a bit more than 100 light-years across. The cluster may have been captured by the Milky Way from a smaller galaxy, or it might be the remaining core of another galaxy. The bright orange stars in the image are red giants, which are old, bloated stars at the ends of their live. [NASA/ESA/S. Djorgovski (Caltech)/F. Ferraro (University of Bologna)]

Messier 79 is a bit of an oddball. Unlike most star clusters of its type, it lines up “behind” us as seen from the center of the Milky Way Galaxy. And astronomers are having a hard time figuring out just where it came from.

M79 is a globular cluster — a tightly packed ball of tens of thousands of stars. It’s about 42,000 light-years away, in Lepus, the rabbit.

The Milky Way hosts about 150 globulars. Most of them were born with the Milky Way itself. That means they contain some of the oldest stars in the entire galaxy.

But a few dozen globulars don’t appear to be home grown. Instead, they were born in other galaxies. Some were snatched from the outskirts of those galaxies as the Milky Way gobbled them up. Others may have started as the cores of other galaxies, but they, too, were grabbed by the Milky Way.

M79 might be a refugee from the Canis Major Dwarf — a possible small galaxy that the Milky Way may be ingesting even now. A second globular may come from that galaxy as well.

Another idea says the Milky Way grabbed M79 billions of years ago, when it merged with a mid-sized galaxy. And yet other ideas suggest other birthplaces for M79 — an oddball star cluster.

Lepus is close to the lower right of bright Orion, low in the southeast at nightfall. It remains below Orion’s feet as they wheel across the south later on. M79 is below the outline of the rabbit. You need binoculars to pick it out.