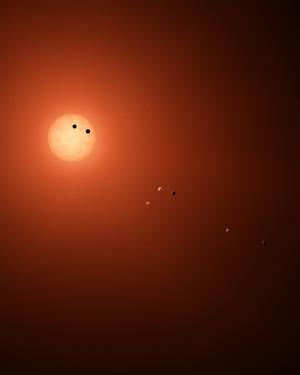 This artist's concept shows the Trappist-1 star system. It consists of a red dwarf star, which is much smaller, cooler, and fainter than the Sun, and seven known planets. Two of the planets are crossing in front of the star. Orbiting telescopes detect such crossings as slight dips in the star's brightness (which is how the planets were discovered). Two or more of the planets lie in the star's habitable zone, which is the distance from the star at which temperatures are most comfortable for life. [NASA/JPL/Caltech/R. Hurt (IPAC)]

Astronomers are still trying to figure out whether one of the busiest planetary systems yet discovered could be a home for life. Some studies give it higher odds, while others give it lower odds.

Trappist-1 is 40 light-years away, in Aquarius, which is in the southwest at dusk, to the lower right of the Moon. The system contains at least seven planets. They’re all small and rocky, like the worlds of the inner solar system.

Part of the confusion about whether they could support life is that we have only one example of a life-bearing planet: Earth. So no one knows what conditions are needed for life to arise. Figuring it out is a matter of a lot of simulations, intuition, and plain-old guess work.

Another problem is the star itself. Trappist-1 is only a few percent the mass of the Sun, so it’s cool and faint. Yet such stars produce outbursts of radiation that are far more powerful than anything generated by the Sun.

And that’s a critical balance for the planets. They’re all within a few million miles of the star. Four of them could lie inside the “habitable zone” — the best location for life. But until we understand more about the star, the planets — and life itself — we won’t know whether anything can live in this busy star system.